Condition Monitoring Group (CMG) Ltd.  was  very  pleased  and  privileged  to  be  selected as one of the local companies representing the many  flourishing  businesses  in  the  Northern Devon area during a recent tour on Tuesday 2nd October  by  His  Royal Highness The Duke of Gloucester, accompanied by HM Lord-Lieutenant of Devon.

CMG  Ltd.  is  an  international  group   of   small   companies   dedicated   to   the   design   and manufacture of electronic systems that collect and analyse vibration data from a variety of different plant and assets, including rotating industrial power  plant  and helicopters,  which is then used to reduce cost of ownership by improving safety, increasing reliability,  and enabling an ‘on-condition’ maintenance philosophy.

The Company originally  relocated  to  Torrington  some  27  years  ago  from  its  beginnings in Barnstaple, successfully developing a range of products over the years, and establishing itself as a significant player within the field of Condition Monitoring. We now have approximately 120 employees across the Group, 85  of  which  are  based  in  Torrington,  with other staff in Fareham (UK), Chicago (USA), Munich (Germany) and Bologna (Italy).

A further extension to our premises was completed last year, with fiscal support from UBI1, providing much-needed additional facilities of approximately 8,000ft2, consisting of purpose-built high-quality office space and engineering facilities that will enable the Group  to provide an enhanced level of service and support to its customers, including a dedicated   IT Suite, Demonstration Facility and Training Centre, and providing a platform for continued expansion and development of the business as we move forward.

The Company was absolutely delighted to be one  of  the hosts for the recent  Royal  Visit  and Douglas Graham, Operational Director,  stated  that:  “As  well  as  his  obvious  interest  in the cutting-edge technology which is being designed and manufactured here, both for Aviation  and  Industrial  applications,  His  Royal  Highness  was  also   interested   in   our very successful  Apprenticeship  Scheme;  having  myself  started  as  an  Apprentice  with   the Company in 1996, I recognise the benefits and advantages of developing our own local ‘home-grown’ talent, particularly when you consider how challenging it can be to recruit  staff in this area who have the appropriate qualifications, experience and specialist skill-sets that we need.”

Mr Gary Lee-Richards, Company Chairman, added that “During  the tour  of  our  facilities, The Duke engaged in detailed conversations with many of our staff and asked a number of interesting and technically-relevant questions.”

Stephen Lee, who is currently undertaking an Apprenticeship within the organisation, commented: “It was really exciting to meet The Duke of Gloucester. He  was  really  interested in talking to all of us apprentices and to hear more about the Company’s Apprenticeship Scheme and the type of work that we do”

Douglas Graham, Operational Director, summarised that: “The Company’s longstanding Apprenticeship Scheme, which has now been running for nearly 30 years, has put Condition Monitoring Group Ltd. in a strong position in terms of continued expansion  and  sustainability over the coming years, offering paid ‘on-the-job’ training and formal qualifications, whilst also delivering skills that are specifically relevant to the business.” 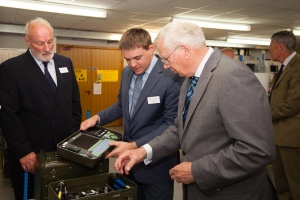 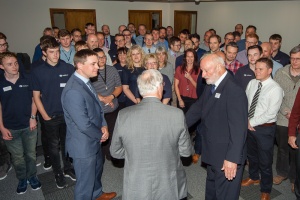 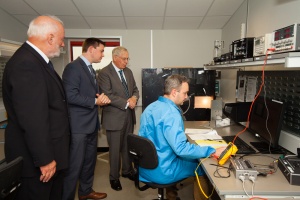 During his concluding remarks at the end of the visit, Gary Lee-Richards (Chairman) thanked both His Royal Highness and HM Lord-Lieutenant of Devon for visiting the Group, reiterating the importance of the ongoing collaborative ventures with local Universities, the vocational training courses provided at Petroc College in Barnstaple, along with the helpful support received from Santander Bank,  which  have  all  enabled  this  rural  North Devon  company to prosper and to achieve significant export sales in particular (in excess of 50% of turnover) and thus contribute to the wider UK economy.